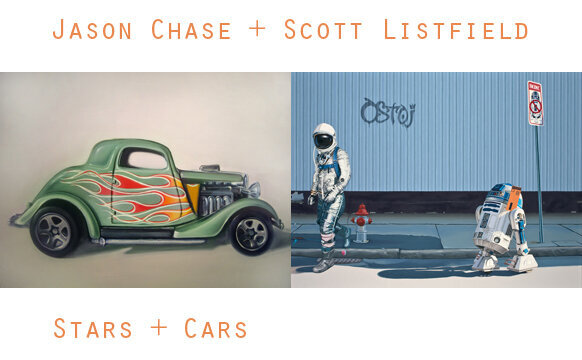 Scott Listfield and Jason Chase make bold, colorful paintings which remind us of what we dreamt the future would be like as kids. They take a long look at our current culture in a wrong-end-of-the-telescope fashion, where very small things might indeed have very big meaning. The toys and fantasies of our youth have shaped the world we have grown up into, but also colored our perception of how things should be.

Jason Chase’s large and vibrant paintings of Hot Wheels cars might at first glance seem like shiny remembrances of youthful toys. But confronted recently with his father’s passing, Jason realized that in a lifetime spent not always understanding each other, the language they shared was talking about cars. Using layered Hot Rod painting techniques learned from his dad, this series of work captures the five Hot Wheels cars Jason bought immediately upon returning to his childhood home.

Scott Listfield’s protagonist is the futuristic spaceman from Kubrick’s 2001: A Space Odyssey, placed in everyday situations as if he just landed here. Looking through the eyes, or space shield, of the astronaut lets us see from the standpoint of strangers in this world, fresh from someplace else. The objectivity that comes from that viewpoint allows us to question what see around us, and the future we live in, in a new way.

Funny, culturally enlightening and critically focused, the individuality of these paintings becomes somewhat biographical. The juxtapositions and cultural specificity function as anachronisms because of our nostalgia and because they act as placeholders for a point in each artist’s personal history. We played with certain toys, watched certain movies and hoped certain things would happen–like flying cars. Each situation reminds us of how we always look hopefully to some other future for our desires and dreams, forgetting the world that surrounds us now is the future of our past. 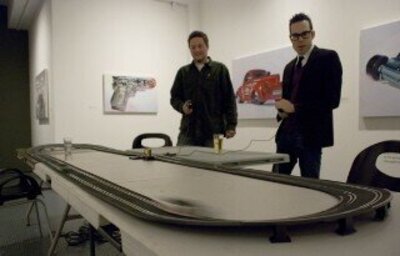