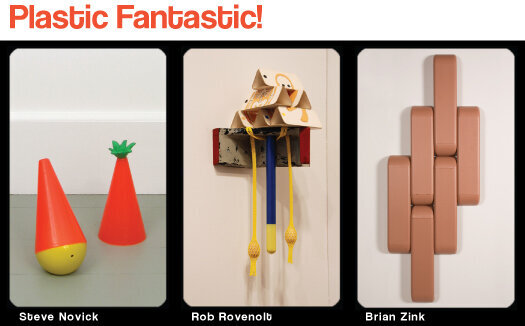 Plastic Fantastic! presents work by three artists whose works combines found objects, assemblage and formalism without losing their sense of humor. Inhabiting the territory between sculpture and painting, these artists employ color, texture and cultural references in equal measure delivering self-contained topographies that are both familiar and surprisingly unknown.

Whether using high chroma toys, industrial plastics or discarded metal parts, the formal clarity of these assemblages relies on the careful consideration of the relationship between different parts of a specific work. The artists must also navigate the previous lives or intended uses of these materials outside the art world. The recognizable objects employed are revitalized or disguised completely as elements in new constellations where form replaces function.

Brain Zink and Steve Novick use “off the shelf” objects and architectural hardware as raw material in their sculptural and wall works. The contemporary, kitschy feel of the objects is embraced and subverted by a deliberate formality and exacting construction that never feels severe. While they often approach Minimalism in the simplified geometric forms and patterns, the materials themselves resist the solemn feel of Tony Smith’s or Robert Irwin’s work from the 1970’s while directly referencing either the Pop Art or Op Art works of that same period.

Robert Rovenolt has a slightly more nostalgic approach often using materials that have aged a bit by comparison to Zink’s and Novick’s clean new plastics. Found and distressed objects lend a warmer but still very strict geometry to Rovenolt’s compositions. Closer to Cornell or Rauschenberg than Smith, the history of the surfaces and parts feel more illustrative and mysteriously narrative than formal.

Together these artist demonstrate the appropriation aspect of the plastic arts that Duchamp and Manzoni irreverently introduced into artistic production. Updating the “found object” in an era when plastic is demonized and recycling has taken on political overtones is an interesting task which each of these artists responds to in a very individual way.