Sunday, December 4, 2022 2-4 pm A conversation on the work of the exhibition with artists Napoleon Jones-Henderson, Jean Apollon, and Duken Delpe, moderated by Danielle Legros Georges. This event is open and free to all. 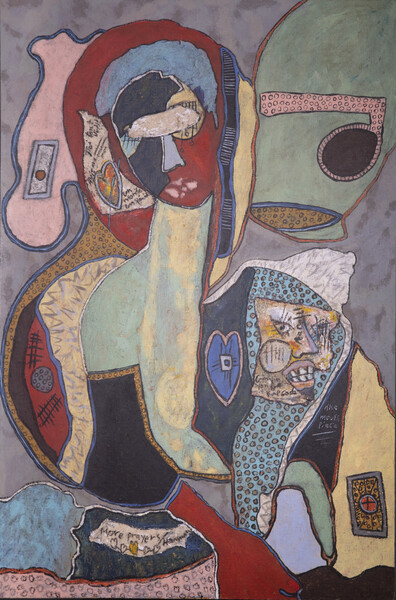 Laconia Gallery is pleased to present a solo exhibition of paintings, sculptures, masks, and tapestry by Colette Brésilla—works that stand in dialogue with Haitian vodou cosmology and Brésilla’s studies at the intersections of the ancestral and female iconography.

History—its hauntings and reckonings, wonders and elucidations—informs this body of work in which the feminine is suggested when not rendered overtly or figuratively. Across multiple genres, Brésilla’s subjects appear as individual sitters, in pairs, in triplicate, veiled, or within the cocoon of a collective power. Erzulie, spiritual entity and mother warrior; and madan sara, market women pioneers of Haiti’s informal economy, share the exhibition space and appear in powerful re-imaginings.

Engaging the project of reclamation, Brésilla also considers the project and politics of self-characterization. If Cindy Sherman and Ana Mendiata employ their bodies to depict multiple identities, multiple women—Brésilla engages positive transformation in the opposite direction. One has the impression that the women subjects of Brésilla’s work contain an aspect of the artist herself, who assumes the right to an expansive ontological stance.

Haitian-born, Brésilla received a BFA from the School of the Museum of Fine Arts, Boston—and has been immersed in Haitian art of multiple media. “Art-making is an integral part of my life experience, coming from a culture steeped in the arts,” she notes. “I believe in the transformative and healing potential of the arts and art-production, and consider myself a cultural worker. Using a Haitian cosmological term, I view my role as an artist as that of a chwal, or vessel of a variety of traditions and aesthetic frameworks, and through which new ideas can flow.”

“Improvisation” she adds, “greatly informs my approach to making paintings. For the past several years, I have painted exclusively with palette knives, oil sticks, and wax paste (teaching myself to work in this manner with these materials). I want to make paintings whose quality in texture gesture beyond the 2-dimensional, and suggest the sculptural. My textile pieces represent a more physical form of work and a welcome re-connection to the ancient technique of appliqué, an important art from Benin, West Africa, the ancestral homeland named by many Haitians.”

Brésilla’s work has been included in exhibitions at museums and galleries including the Museum of Fine Arts, Boston; The New Bedford Art Museum; Centre D’art Visuel Galerie and Musée D’Art Naïf, Québec; The National Association of Women Artists, Inc., New York; Saatchie Gallery online; Aurora Gallery, Worcester; the Providence Art Club; and the Kim Po Gallery, New York. Her paintings have been acquired by corporate and private collectors in Paris, Yorkshire, Boston, New York, and Miami. She has also collaborated with academics and literary artists on book projects.