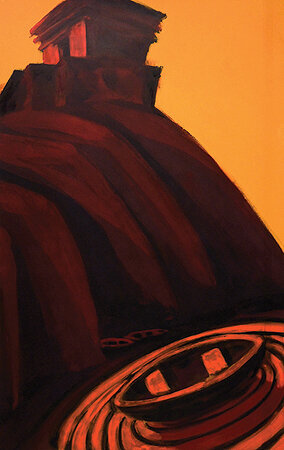 Laconia Gallery presents a retrospective of Candy Nartonis, a Boston-based artist who has recently relocated to Albuquerque, New Mexico, where she has twice been a guest artist at the Tamarind Institute press. For 30 prolific years she has produced work in a variety of mediums at many different scales in her Boston studio. Her work has been collected and exhibited across the United States and internationally. As a former resident of Laconia Lofts and board member at the artist-run Laconia Gallery and also at the Boston Printmakers, we are proud to share an insider’s view of artwork produced by this master printer and colorist during her Boston years.

Candy is a printmaker at heart: She works an idea through processes that use craftsmanship and spontaneity to render it into an image that gains power from the important distance that an “indirect” discipline allows. The slight surprises and variations are at the core of what Nartonis chooses between, responds to, re-calibrates, overprints or directly paints to create the relationships, spirituality and gesture that are integral to her work. Nartonis’ expressive power lies in an ability to balance flat textures and gestural strokes in order to retain a clarity of form.

In one series of monotypes, a central enlarged flower or pear, which is often bigger than human scale, breaks outside the boundaries of the frame. From across the room the sweeter overall shape of a fairly traditional still life beckons. When viewed at close proximity the surfaces and edges of the objects become brushed and splattered and worked to the point of almost complete abstraction, and fall back into their descriptive roles as iconic representations as we step back from them. Combining wiped and painted areas, and rich shaded areas full of texture, Nartonis makes expressionistic marks that reward the nose-to-the-glass attention they attract.

In other works, color drives the entire scene. Saturated, densely patterned woodcuts, like Bink (2010) opposite, screen prints, and oil paintings use color and pattern to dig into our psyche and connect with cultures and places that are significant to the artist. They become distillations of both vision and experience. Silhouetted figures and high chroma foregrounds or backgrounds emphasize the intensity of a situation or define a time of day.

The motif of a small boat reappears in many forms, a potent symbol of both arrival and escape. The isolation of the figures or boats within a mostly open ground (water in some cases) zooms us out of the composition into narrative overview of works like Tulum A (1993) seen on the cover.

The loosest works, monotypes, and a screen print/monotype combination, effortlessly describe a form with sensual, flowing lines. Reductive color and increased scale play off of each other to simplify elegant forms without diluting them. Nartonis explains her use of solitary forms and figurative elements as a way to “push scale in both directions” She goes on to explain, “[I] employ simple objects as stand-ins for individual and interpersonal shifts while I push those objects, in both painting and printmaking, into symbolic roles while breaking down the forms.”

An affinity for working serially resulted in an interest in the monotype process. The consistency or variation within a range of related forms such as oversized flowers or branches gives us an informed view of how a process (like the monotype) is inextricably linked to the conceptual and expressive ideas of an artist. In addition to the serial works which were revisited for decades, the exhibit features examples of shorter bursts of experimentation with spray paint, woodblocks, and even sculptural installations.

Extensive travel–both art related, and for pleasure–figure in much of Nartonis’ creative output. China stands out as particularly important to her work. She had always felt, “an Asian influence in my work…a use of voids, [the] placement of objects, color relationships…so when I finally went to China, everything just fell into place and I have been using those insights, images and memories ever since.”

We all hope that the artist will be just as inspired by her new surroundings and we wish her all the best.